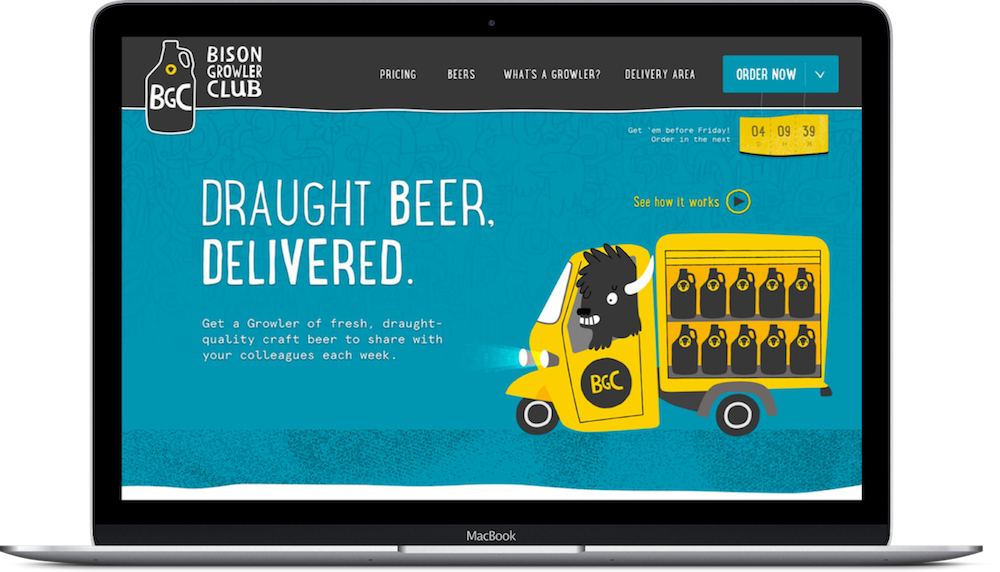 Since they set up on East Street in Brighton 7 months ago, Bison Beer have gone from strength to strength. Their craft beer shop is not only perfectly located in the centre of town, but it sells almost every craft beer imaginable.

We have never been ones to shy way from good quality beer, so it was only natural that we formed a good relationship with Nick and Jack (the co-owners) and sampled their wares every Friday when they delivered it to us. Because there are a few of us in the office, we moved away from buying individual bottles, instead buying a couple of the new kids on the block - the popular 64oz ‘Growler’; a glass, reusable flagon that holds almost 4 pints of great beer fresh for up to 3 months.

It’s these Growlers, and their environmentally-friendly nature, that are becoming a roaring success in the craft beer scene. Though most folk love to visit the Bison store to get their beers for the weekend, many people had been asking whether the Bison boys would consider delivering them. The Bison Growler Club was born.

A match made in heaven

Armed with the idea for a beer delivery service, Bison needed the skills and abilities to sharpen the offering, articulate the proposition, and get it out and in front of potential customers. Clearleft and Bison had a chat, agreed to form a partnership. We applied a UX, design and development lens to the idea and launched an MVP (Minimum Viable Product) within a 3 week window.

Here’s how we did it.

As the UX Lead on the Bison Growler Club project, Andy Thornton kicked off the project using his project canvas.

During a 2-day workshop we worked closely with Nick and Jack to help uncover and define the vision of the Bison Growler Club. What is it? Who is it for? What challenges will we face, and what activities can we apply to address them?

Honing in on the crucial value proposition allowed us to then look more closely at ‘who’ we’re designing this product for. Through an empathy-based persona creation session we established the core types of users, with most of them being actual representations of Bison’s daily walk-in clientele. Finally we looked at how we’d tackle the project: what next steps to take and - crucially - what assumptions we were making in the interest of launching an MVP.

As the end of Week One neared, we explored both the technical and visual sides of the project. Perhaps uncharacteristically we were doing the back-end build, but this led us to determine the best candidates for an easy-to-manage e-commerce setup that allowed for repeat subscriptions. As Graham Smith looked into the options, Jon Aizlewood explored the visual and UI side using element collages - quick and unpolished explorations into UI elements such as navigation systems, typographic layout, palettes and action elements.

However other assumptions weren’t as well nailed down. We were unsure of the pricing ‘sweet spots’ as well we as the overall quantity of beer that customers would want, so we launched a (Typeform powered) survey, sent at exactly beer o’clock. Its aim was to reveal the beer-drinking habits of Clearleft’s extended social network to better inform our pricing and proposition.

The results, coupled with informal chats at Bison’s store as well as desk research on beer consumption and working habits in Brighton & Hove, yielded some strong insights. They debunked some assumptions we’d made over the minimum quantity of growlers ordered, which thereby affected the pricing structure. By reducing the minimum order to one growler, we could vastly increase the market opportunity by almost 450%.

With the proposition, vision and purpose defined and refined, we started designing the thing. Working with Nick and Jack to establish the visual direction, style and tone of the site, Jon and Andy designed the layout of the single-page layout and hierarchy. At the same time, having collaborated on a project previously, Nick and Jack pulled in 3rd-party illustrator Chloe Batchelor to create brand assets for the Growler Club. As the design took shape, Graham started the front-end development and settled on the platform (Wordpress) and subscription model (WooCommerce) that would be used.

As Graham worked tirelessly to integrate his front-end markup into the back-end platform, Andy gathered additional research via shop walk-ins. Jon donned a photographer’s cap to snap some Growler product shots, and the finishing touches were applied to the illustrations and design style.

The Bison crew had been invited to sponsor a Brighton-based awards ceremony called the P.E.A. Awards. Standing for People, Environment and Achievement, the awards celebrated Environmentally friendly and zero-waste companies in Britain. Using the platform to publicise the Growler Club, we pushed to have a holding page extolling the virtues of craft beer-filled Growlers delivered to your company for Fridays.