I’d just bought a new camera when I joined Clearleft in September 2016. It wasn’t long before I was putting it to good use, shooting team portraits for the company’s new website.

Hana identified some areas for improvement on the previous Clearleft team profile page in her blog post earlier this year. There was a lack of consistency in style, setting, lighting, colour, and mood. With new team members coming on board and a new website on the way, it was obvious we needed to “Clearleftify” our photography process.

As a longtime photography enthusiast, I’ve owned various film and digital cameras over the years. I learned the basics of studio photography and manual lightroom processes during my degree, and I’ve always enjoyed taking on freelance photography projects in addition to my graphic and web design work. All of this put me squarely in the frame for the new project.

Based on Hana's brief, we decided to have a go at converting Clearleft’s auditorium space into a studio for an afternoon, to see what kind of results we could get. The space has several advantages:

Camera-wise I was keen to put my new toy through its paces. After a lot of research and detailed analysis of Nikon and Canon’s latest offerings I’d decided on the Nikon D750, a full-frame DSLR camera.

The choice of lens was partly dictated by the brief and partly by the space we had to work with. We wanted to photograph people from the waist up, to try to capture some character in their bodies as well as their faces. The size of the room would not have allowed this with an 85mm portrait lens – my first choice – so we went with the wider 50mm (my 1980s vintage Nikon AF Nikkor 50mm f/1.4s Mark 1, to be precise).

The lighting equipment we used was simple: A basic continuous-lighting softbox kit and a roll of white backdrop paper mounted on a fixed screen in the auditorium. We chose continuous light rather than flashes because we wanted people to relax into the photoshoot and hopefully forget about the camera.

After assembling the various bits and pieces of equipment, we spent a few hours grabbing willing subjects from the office and experimenting with the positioning of the lights and camera. Since we were aiming for bright, even images, we ended up lighting the subject evenly from both sides, with one light slightly closer to prevent faces from looking too flat. We brought the subject far enough forward to avoid any shadows falling on the backdrop, and pulled the camera back to fit enough of the subject in frame. After figuring out reasonable aperture, shutter speed, and sensitivity settings, we were getting some pretty good results.

Looking at our test shots on a big screen, two words immediately came to mind: Motion blur. From the outset we knew we wanted to avoid posed portraits and “say cheese” expressions. We were attempting to capture people *in the moment* rather than staring into the camera with a forced smile. Since we wanted people to relax and chat during the shoot, we needed more light so we could shoot faster and minimise motion blur. This issue highlighted a limitation of the budget lights we were using: For the price they do a great job but they are lacking any controls whatsoever. Brightness can only be dialled up by moving the lights closer to the subject. Without a better quality softbox, moving the light closer just resulted in shiny skin and harsh shadows.

In the end I upped the camera’s ISO – its light sensitivity – to compensate. Increasing this value allows correctly-exposed photographs in darker situations at the cost of introducing some visual noise into the photos. Not a perfect solution, but worth the trade-off in this case. We also decided at this point that it would be useful to review the photos on a larger screen while we were shooting, to make sure we were getting sharp images. This was easily done with a MacBook, Adobe Lightroom, and a tether cable.

The test shoot had given us a good idea of how much time we’d need to photograph each person, as well as a few ideas on distraction techniques to take the team’s minds off the camera. We booked out the auditorium for a couple of days and tried to schedule in as many shoots as possible. We actually needed five or six sessions in the end to fit everybody in around client work and calendar clashes. This is where the simple and well-documented setup worked in our favour – it only took 15 minutes to build up and tear down and consistency across sessions was very good.

In being very prescriptive about the process from a technical perspective, we’d created a blank canvas, primed to set off the characters of Clearleft. Being new to the company and not having had a chance to work with everybody, I’d formed first impressions but it was fascinating to watch the team react to this potentially awkward situation. Do any of us really *enjoy* having our photo taken? Some people were very conscious of the camera at first, others were much more confident. What we were looking for was a relaxed, natural moment.

I’ve always felt that to capture somebody’s essence in a way that reflects how they actually are in life, you need to catch them slightly off guard. The less the subject is thinking about the photoshoot, the better. Quite a challenge under the studio lights.

Although each person behaved differently, the Clearleft team are a friendly and amenable lot. With the help of music, interviews, stories, and plenty of banter from Jess and Hana, we had a great atmosphere going and were able to capture the shot we were looking for in every case. The shoots averaged about 10 minutes each. We got 50–100 clear shots of each person, from which we presented the top ~5 for them to pick from. Post-processing was minimal; I created a Lightroom preset to boost brightness and contrast, removed awkward reflections and the odd flyaway hair, and replaced the white background with a flat colour.

This was a really enjoyable and rewarding project to be involved with so early in my Clearleft career. It was an opportunity to get to know the team better, as well as to practice my studio photography skills. The set of images we produced met the brief: They’re clear, bright, friendly, relaxed, and they do a pretty good job of conveying some aspect of each person’s character.

We already have the next session planned, so keep an eye on the Team page for new faces coming soon.

Read the previous blog post about the new site and rebrand: Take a closer look at the patterns in our language - by Ellen de Vries. 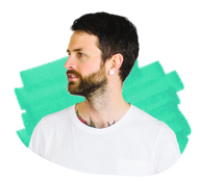