A new digital lifestyle experience developed with the product team at Channel 4.

What we did
Interface design
Front-end development 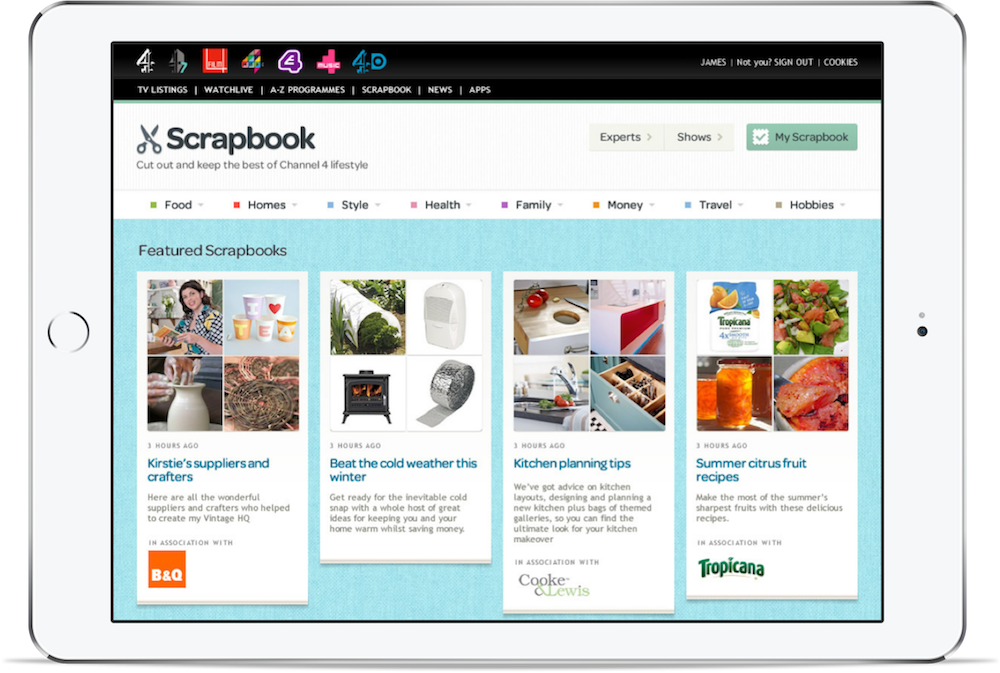 From both a strategic and commercial perspective, the Lifestyle sector represents one of Channel 4’s key audience groups. Successful programmes about Food, Homes and Fashion were matched with the rapid rise of key talent such as Jamie Oliver, Kirstie Allsop and Mary Portas. With the relaunch of More 4 approaching, the Channel was keen to explore new ways to connect lifestyle across the whole network and bring users closer to the experience.

In search of opportunities

During the project’s inception, Clearleft conducted a combination of Stakeholder Interviews and Collaborative Design Workshops all designed to open up and explore the possibilities available. Combined with some rapid User Research and exploration around alternative business models, the team were able to generate a broad range of ideas in a very short period of time.

In addition to the themes, we also generated a set of strategic recommendations around the process and conditions necessary for a project of this nature to succeed. It was immediately clear that this would not be a conventional process for the Channel to adopt.

The team recognised that Channel 4 had a unique opportunity to combine their three pillars of Brand, Content and Audience within a digital service. Visualised as a simple Venn diagram, this became the lens through which any of our ideas could be judged. Anything positioned at the intersection of these three attributes would play to the Channel’s unique strengths and give them the best chance of success.

By the end of the initial engagement, the team had distilled their ideas into a single ‘Vision Piece’. Accompanied by a complimentary slide deck, the organisation now had enough information to communicate these ideas to a wider audience, ranging from internal stakeholders to the general public.

Clearleft were quickly asked to return to Channel 4, this time to focus on the evolution of the most compelling ideas from the first phase. The overwhelming response – from both focus groups and internal stakeholder feedback – was to pursue the Join up your life theme.

By this stage, the team was convinced that the opportunity for Channel 4 lay not as a content provider – this would have been both costly to maintain and clashed with the ambitions of the Channel’s key talent – but as a service that allowed its users to ‘join up’ the various parts of their Channel 4 experience. This was a key insight for the project. By re-positioning Lifestyle as a service, we not only liberated the Channel from their demanding editorial obligations, we re-positioned them as the key component within a system. The strongest candidate to achieve these ambitions was a bookmarking service that enabled the Lifestyle audience to collect and save their favourite Lifestyle content from anywhere on the web.

With momentum behind us, we worked quickly to define the proposition, visualise key customer journeys and create indicative UI designs. On a strategic level, we communicated that success on this project would require not only an unorthodox business model but also a new approach to the product’s development more akin to the rapid, iterative environment that characterises many successful start-ups.

Despite the team’s confidence with the idea, we needed more proof that this concept would resonate with the core audience before we could begin full-scale production. Yes, we had a clearly defined proposition, but would anyone really use a product of this kind? If the product disappeared, would its users care?

In order to validate our hypothesis we moved into a phase of rapid prototyping, at the heart of which sat the Lean movement’s central tenets of Build, Measure, Learn. Over a four week period of intensive guerilla testing and iterative prototyping, we were able to refine our Minimum Desirable Product, layering our expertise in interaction and UI design into the product as the prototype grew in fidelity.

With confidence growing, Channel 4 elected to bring in Thoughtworks as their development partner on the product. Our iterative approach dovetailed with the favoured Agile methodology of the Thoughtworks team and as the product matured we were became key partners in defining the product’s backlog. Scrapbook was finally alive.

Scrapbook launched to the general public in May 2012. The lead–up to launch saw our team embedded within a cross–disciplinary partnership between Channel 4, Thoughtworks and Clearleft. Our focus was ensuring the strategic vision and user-experience of the product remained intact, while simultaneously defining a robust visual design system to ensure the future integrity of the product. Since the product’s launch Clearleft have continued to consult on Scrapbook. A major new release is planned for early 2013.