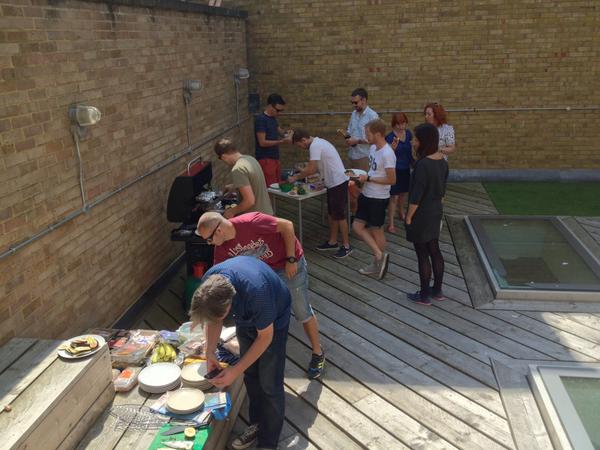 After the spectacular storms at the start of the week We’re rounding off with a lunchtime BBQ. Rich was smart enough to get us a pretty top notch grill back at Easter and it has certainly been put through its paces, today may have been its truest test however with far more cuts of meat, fresh caught fish and other delights than it could take.

This week Andy P launched the Brighton Digital Karting Championship . An evening event on September 18th held as part of the Brighton Digital Festival, which for us really kicks off with dConstruct. Tessa has been discussing possible uses for our communal spaces here at 68Middle.St and has already got a number of event bookings for September. If you would like a space to put on.. well anything please get in touch, we’re one of the only fully accessible venues in Brighton.

If you’re up for a night of Go-Karts then sign up, there are still a few team slots left and individual driver seats. More details are on the page.

Sophie has been rounding off staff reviews as we hit the half-way mark of the year, lost her glasses and is reflecting on almost a year in our new home.

Plans for our annual Hackfarm event are underway with Jess and Kate investigating locations and suitable times to get away.

Viviana has been preparing design workshops next week. Rich and Mikey have been beavering away for the Beeb, visualising a pioneering digital future. Jeremy and Anna Debenham caught up with the guys at Code for America. Andy B went has been to mainland Europe and back in an afternoon. Mark was out this week running around Mont Blanc as you do, whilst Ben Sauer has taken the smarter approach to holidays. Ben White and Andy P have been preparing for a trip to Denmark next week to lead a design sprint for a new service.