Thirteen. Unlucky for some, but not for me! Although responsibility for May’s weeknotes has fallen upon my shoulders, Andy Parker, our excellent intern, graciously pulled this week’s together without me even asking…

May rolls around bringing with it big changes.

1/5th of the food dilemma during the week has finally been resolved thanks to the new Street Diner (@StreetDiner) which resides at Brighthelm Gardens every Friday. The guys at Troll’s Pantry need to buy another grill or we may never make it to the end of their queue. The variety still doesn’t resolve the paradox of choice, but it has ensured that we’re enjoying sunshine and great food.

The render and first coats of paint have gone onto the outside of our new building, with more detail now locked down as to what is going on with the interior. 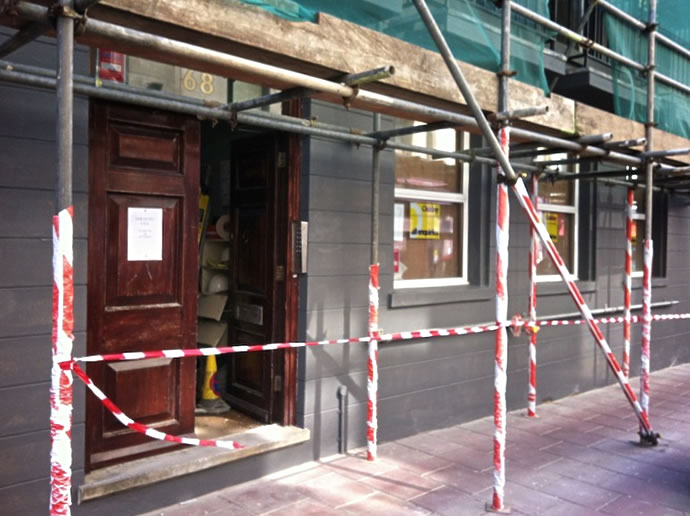 Andy has been travelling around Europe taking in conferences in Amsterdam and Paris while Rich attended Kerning Conference in Italy. Jess, Mikey and Batesy enjoyed a day at Kew Gardens – an experience the rest of us were quite envious of. Kate is still on holiday, hopefully with the word count climbing on her novel (and we imagine even more vintage furniture finding its way into her new home).

In the office, we’ve been become ever more agitated by the constant cutting out of our airplay speakers. Rich, Paul and Andy P are trying out some alternative ways of combining content diagrams, box models, design and prototypes in code for The Francis Crick Institute. Team Fine + Rare are hard at work, with Jon, Mark and Boxman running at full speed, now ably assisted by Josh. Ben and Batesy also kicked-off an exciting project for Evo Magazine.

With a mixture of suspense and subtlety Jeremy announced and launched dConstruct 2013 to much a-twitter about Sushi songs, as Adam Buxton is just one of the excellent speakers at this year’s event.

This week also saw us spend a final few days in the company of Dr Harry Brignull. We sent him off with an intense session at the local Laser Arena followed by some extremely hot chicken wings and good ales, all while ensuring most sentences included Arnie quotes. I (Andy P) have greatly enjoyed working with Harry the last few months, particularly on the Lloyds Online Doctor project. He’s quite a character. I can’t speak for everyone here who has worked with him for much longer, but I’ll miss his Instant Party Mix and a general sense that there is a bad joke bursting to come out.