Getting bigger as a company has meant that doing things together has become increasingly difficult. 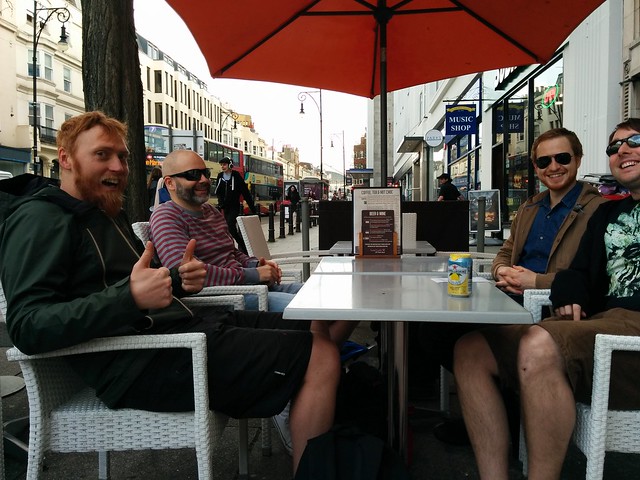 A flash of inspiration came to me. Slightly furry mouth, dry eyes, my fork pierced the last morsel of sausage surrounded by slowly drying bean sauce. Chewing, I looked around and thought, this is nice.

It was a cold December morning in 2013, the morning after the Clearleft Christmas party and the majority, if not all of us had made it to Seven Bees Cafe that once resided in the walkway alongside our home at 68middle.st. Even then, the occurrence of get togethers were starting to dwindle, there were too many people to get together for lunches, or even a drink on a Friday. Lives change pace, priorities alter and free time becomes a commodity rather than a right.

It occurred to me that everyone has one thing in common. They have to eat, and they have to be at work in the morning. In tandem with this, Graham was new to the city having recently moved from the hypnotic world of Manchester and was still finding his way around our coastal retreat.

In true experience design spirit, breakfast club was born. A simple concept, and somewhat inspired by an idea from Tom Prior ; taking his team out for Breakfast, the rules were simple. Friday morning, and we try a different place each week. It acted as an opportunity to try new things (I never thought I would say I like sour dough, or maple bacon) and to explore an ever increasing circle of spots around town.

For me, it has meant an opportunity to spend time with people who I might not often see for weeks at a time and ensures I start the day with some agency fuel inside me.

We pick a location on a Thursday afternoon; this has been an issue as there are various areas in Brighton that can't start trading until 10, if you have any recommendations we would love to hear them.

The number of people who arrive varies, but everyone is always welcome, in fact, I'd like to open this up to everyone, if you'd like to join us for a Full English, or a Smashed Avocado and Eggs, get in touch via Twitter on a Thursday.