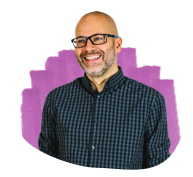 Today we started a collective set of personal projects under the umbrella of something called 100 days .

The task is to repeat a ‘design operation’; any creative process, that needs to be completed and documented every day for the next one hundred days.

The project is inspired by a post by Pentagram’s Michael Bierut who outlines this as an assignment he sets for his students at the Yale School of Art. I initially suggested it to the design team during one of our weekly design reviews as an interesting exercise we could do to sharpen our skills, but —once word got out— I was amazed to find that the majority of the Clearleft team wanted to take part.

So, what’s the point? Well, in addition to honing your skills or learning something new, it’s primarily an interesting exercise in creativity and sustainability. As Micheal says “it’s easy to be full of enthusiasm at the start of a project”, but what do you do when you’ve run out of ideas, have had a shit day, or are tired and stuck on the train. How do you come at the same thing again and again to create alternative outcomes. The objective isn’t to create a beautiful set of 100 designs —although I’m sure that won’t stop some of us trying— but rather to ensure that you can keep doing it.

The team have come up with lots of interesting operations; from drawing, writing and photography, to puppet-making and nail art.

Lets see how many of us are still going in a month.