Create a world for children.

As an outcome of our strategic design work with Penguin.co.uk, we were engaged to deliver a responsive websites for both Ladybird and Puffin.

What we did
User experience design
Interface design 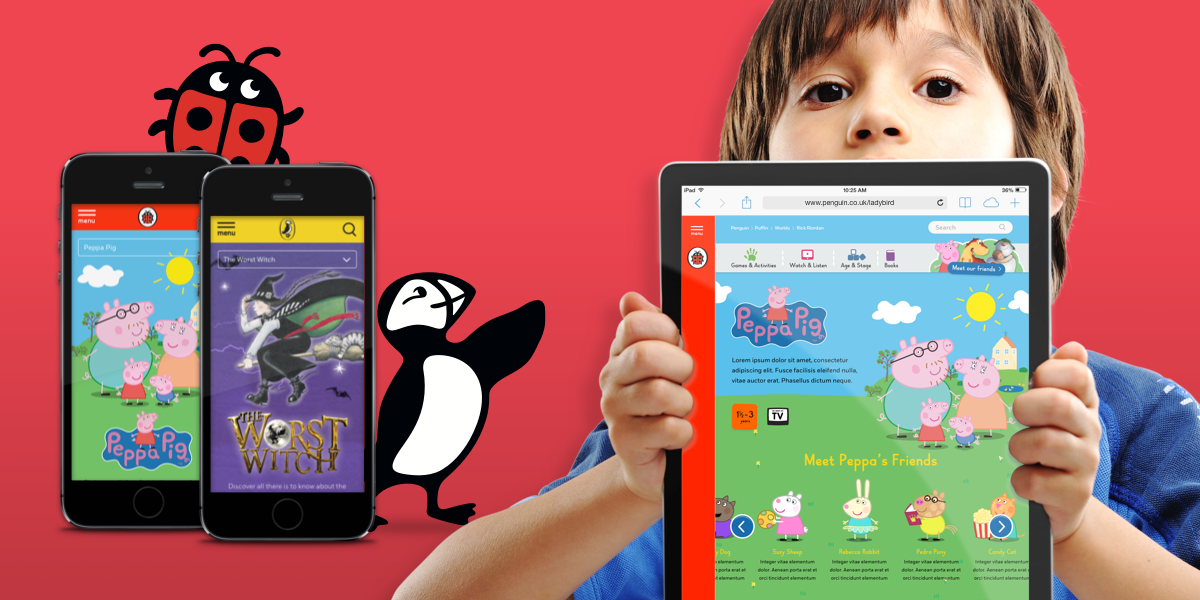 Our challenge was to incorporate, adapt and extend the design language established as part of Penguin.co.uk to a radically different target audience of pre-teens and parents of infants.

We also needed to be mindful of a highly constrained technical environment and a keen desire from key stakeholders to launch the site as soon as possible, working to some fairly aggressive deadlines.

Because the core proposition of each imprint provided a unique challenge of engaging with its audience, it soon became apparent that simply reappropriating the existing patterns designed for adult consumers was unlikely to suffice.

If the mission of Penguin.co.uk was to provide access to a catalogue of author spaces serving exclusive content, then this wasn’t directly scalable to the world of Puffin and Ladybird.

Puffin’s mission is to bring kids between 7 and 12 years old closer to the characters they love. Ladybird aims to help parents of under 7’s get their infants reading. In both cases, gaining an awareness of the author is diminished in favour of either exploring characters and their respective worlds (in respect to Puffin), or achieving learning and development objectives (in respect to Ladybird).

We therefore began by sense checking the objectives of each imprint appropriate to its audience. As part of a series of rapid discovery workshops we restated the core business goals of the site, the target audience groups and their needs, and began thinking about how we would satify them.

At the time of our involvement, the Puffin universe was a disparate collection of author-led microsites with no real shared structure, appearance or approach to content. Whilst this helped provide authors with a bespoke presence, it made publishing and ongoing maintenance of content extremely problematic. It also prevented Puffin from establishing relationships between series of books from different authors that might otherwise share the same audience.

To solve this we focused on establishing character-led ‘worlds’ as key entry points to a single site, to substitute for the existing independent microsites. These immersive hubs provided Puffin kids with the ability to explore their love of a favourite character or series, such as Rick Riordan’s Percy Jackson or Jacqueline Wilson’s Hetty Feather, and also extend their online experience into similar worlds from other authors. Whilst each world hub allowed editors to provide a highly tailored appearance, they also collectively shared the same design DNA of reusable patterns and components.

Another key benefit of this consolidated solution was that it enabled us to strengthen the relationship between the publishing family of imprints. By using a vertical ’Spine’ navigation to anchor the design language across sites, we were able to explicitly associate the brand siblings of Penguin, Puffin and Ladybird.

Throughout the project we worked in rapid two week design sprints focused around discrete user journeys through site content. Each sprint emcompassed a multi-disciplinary team consisting of Clearleft practioners and Penguin Random House stakeholders conducting and participating in collaborative sketching sessions, creating interactive mockups of design elements, and documenting user interface patterns for use in implementation by the development partner. We also ensured ongoing feedback allowing incremental improvements on our solution by establishing a cycle of research and testing with the target audience.